Curious about how people in past centuries envisioned the I Ching hexagrams? Visit our RESOURCES page to see some examples of charts organized by trigrams or  received order.

These handy diagrams were used to study characteristics and relationships between hexagrams, as mnemonics to help memorize hexagrams, and as hexagram finding aids.

The Nuclear Hexagram Chart by Qian Chengzhi (Qing dynasty) to the left is one example. Around the outside are the sixty-four I Ching hexagrams with their names, arranged by lower trigrams in the “Pre-heavenly” order (the same as the Fuxi/Shaoyong chart). The second ring inward are the nuclear hexagrams for the outer ring, formed from the inner four lines of the original hexagrams. The third ring repeats the process, in each case yielding one of the four “core” hexagrams. 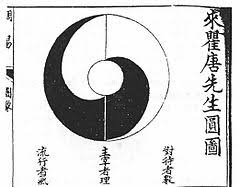 Famed Yijing scholar Lai Zhide (Lai Chih-te, 1525–1604) of the Ming Dynasty was heralded for his in-depth investigation of the hexagram graphics and collection of a vast array of charts on the subject. His book has been in print, in many editions, continually since.

Dr. Larry Schulz wrote his dissertation on Lai, and has made his thesis “Lai Chih-te and the Phenomonolgy of the ‘Classic of Change’ (I Ching)” as well as more recent articles about the hexagram order available at his own website.

All material ©2015-present by Barbara Davis